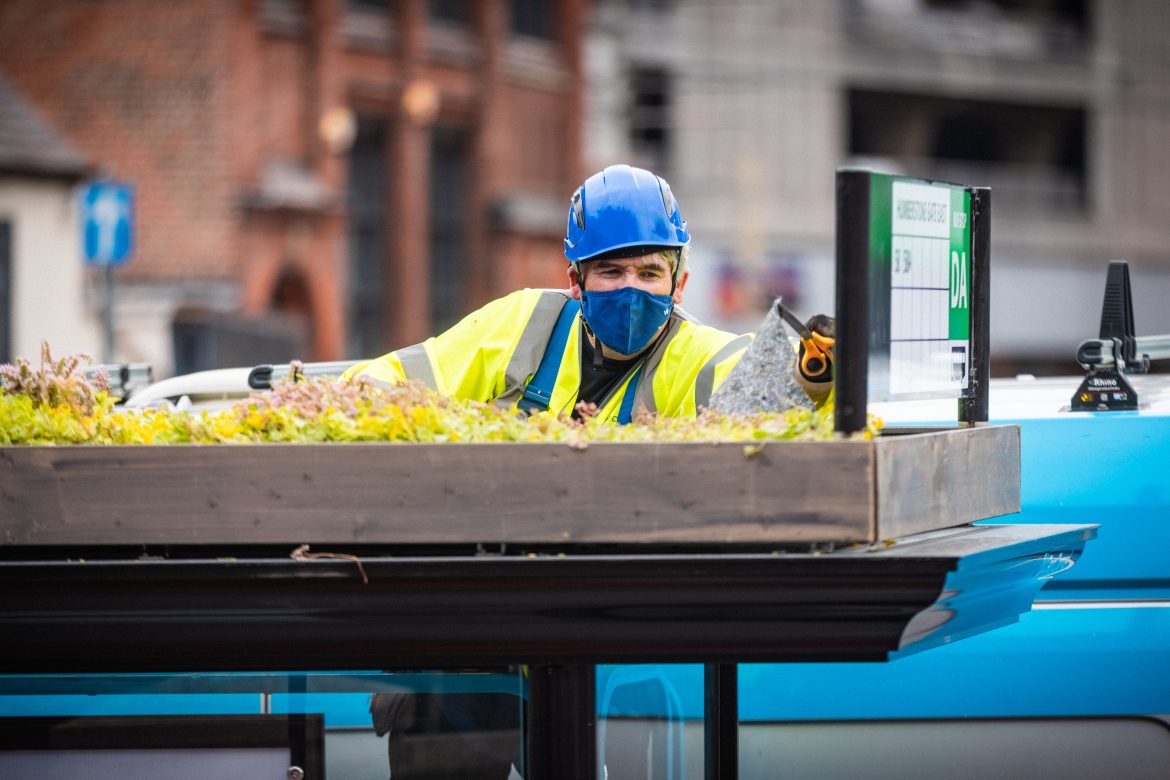 Leicester residents and visitors may have little idea that an urban transformation is taking place just a few feet above their heads thanks to a ground-breaking initiative to green the city and support ecological diversity.

Affectionately nicknamed ‘bee bus stops’, the shelters form part of Leicester City Council’s ambition to be a carbon neutral and climate-adapted city by 2030, while delivering an invaluable boost to the locality’s biodiversity, most notably pollinating insects. Such a large network of living roofs is a first for a UK city and an important step forward in tackling the decline of urban greenery, flora and fauna.

Julian Thurbin, Wallbarn Director, explained: “This is an absolutely fantastic project, providing the city with a ‘bee superhighway’ and all the many recognised benefits of living roofs. It’s showcased how adaptable the modular system is and what can be achieved by uniting street furniture and green roofs, providing the people of Leicester with splashes of greenery that will change with the seasons.”

Wallbarn worked closely with Clear Channel to ensure a made-to-measure fit for M-Tray on the new bus shelter design. Wallbarn says M-Tray is the perfect solution for bus stops and other transport infrastructure given its fully established nature and modularity. All elements of a traditional roll-out system – drainage, root barrier, substrate and sedum or wildflower plants – are contained within its 500mm x 500mm x 100mm cassettes, each of which are mini self-contained, fully grown green roofs delivered from field to site within 24 hours if required, assisting tight project schedules and ensuring plants arrive in pristine condition. The one-man lift trays simply click together, delivering a secure, established living roof quickly, easily and cleanly with virtually no on-site waste. A major benefit of the M-Tray system is the ability to remove/re-lay individual trays if deck access is required. This can be done quickly and easily and does not disrupt the entire roof.

Julian added: “For the Leicester project we supplied M-Tray planted with wildflowers grown at our nursery in Hampshire. It’s a beautiful blend of more than 18 different plants which change in appearance according to the season, offering all year round greening, comprehensive cover and a gorgeous carpet of flowers in summer.”

Will Ramage, Clear Channel’s Managing Director, commented: “Our Living Roof Product was first introduced in the Netherlands and we were excited to bring this green technology to the streets of the UK. Finding the right partner was essential in making this a reality, and we look forward to building on our partnership with Wallbarn by rolling out even more Living Roofs to UK streets. We could not be happier to be working with such a forward-thinking and award-winning company.”

The new bus stops have been well-received, as Deputy City Mayor Cllr Adam Clarke, who leads on environment and transportation, explained: “It’s great to see the first of Leicester’s new living roof bus shelters appearing across the city. We’ve already had fantastic feedback from people who are as excited as we are to see this bee and butterfly, friendly revamp of bus shelters taking shape.”

Leicester’s initiative is perfectly in step with the growing desire worldwide to ‘green’ urban areas to help tackle climate change, a challenge being discussed by world leaders at COP 26 in Glasgow next month. Wallbarn believes that greater emphasis should be placed on ‘retro-greening’ towns and cities, taking advantage of the hundreds of thousands of square metres of redundant flat roofs on residential, commercial and public buildings. A 2008 study* found that 19.8 hectares of green roofs in Chicago removed 1,675kg of air pollutants over the course of a year, of which 52% was ozone and 27% nitrogen dioxide, and that’s before taking into account reduction in the Urban Heat Island effect and rainfall attenuation.

Take a look at a video with comment from those involved in the Leicester living roof bus stop project here. 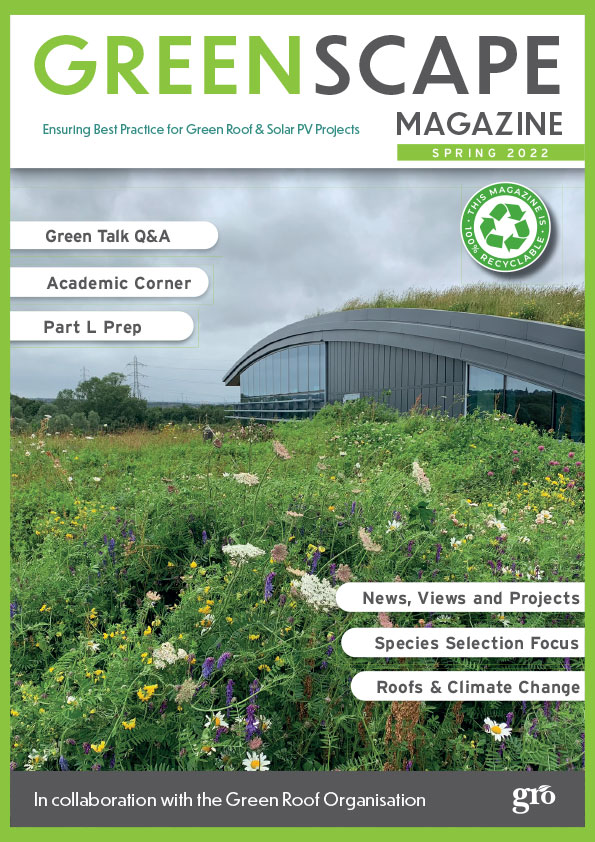