In the first instalment of his new, regular column, Dr Tom Young, GRO Board Member and Environment Systems Manager at STRI Group, looks at biosolar roofs in more detail…

A huge amount of relevant research into green roofs has been conducted over the last 20 years. However, an issue with academic research is that it often does not filter through into the industry to help with improving design and maintenance of green roofs. In this regular column, I hope to provide easy to read summaries of hot topics in the green roof academic sector, and introduce readers to some academic research which is available.

A common statement that everyone who has worked with green roofs has heard is: “I want a green roof, but I can’t have one as I want solar panels/PV”. Now, having either of these technologies is commendable and will improve the sustainability credentials of a building. However, the answer back should always be: “well, why don’t you have both then?” Not only do you gain the benefits of both, but the two systems can actually complement and improve one another. Known as biosolar roofs, developers are increasingly becoming aware of the benefits of combining these two technologies.

One of the first major studies into this area was conducted by Manfred Kohler in 2007 which looked at two rooftop solar farms in Berlin; one with a bitumen roof and the other with a Sedum extensive green roof. This study provided initial results into an 8-year study and suggested a number of positive feedbacks from the two systems which have since been investigated by others in much more detail. Standard PV (photovoltaic or solar panels) panels appeared to produce 1-15 % less electrical energy during the study period compared to green roof PV panels, and lead to an increase in plant diversity across the green roof. This was linked to the increase in ecological niches provided by the solar panels, with a decrease in surface air temperature by the green roof increasing PV panel efficiency. Subsequent studies have clarified the mechanisms described in the Kohler 2007 paper and helped to optimise the design of biosolar roofs:

General power output improvements ranged between 1-8 %, with an average of 1-3 %. Some studies show negligible improvements (0.08-0.5%), due to position of solar panel, vegetation type and climate.

Reduced air and roof temperature can reduce requirement of air conditioning within building. Therefore, building energy requirements are reduced, allowing a greater amount of electricity to be used for other purposes or exported to the grid.

Energy savings of 0-11 % have been modelled and observed for European green roofs, and up to 79% for roofs in Singapore.

Increased range of shade patterns, which in turn causes range of temperatures across roof surface. Uneven distribution of rainfall across the roof from solar panels, leading to wetter and dryer areas.

Some plants enjoy different temperatures, and substrate moisture compared to others and thus differential plant communities start to form. Kohler 2007 observed an increase in plant diversity of 24 % on a PV roof compared to non PV roof.

As a word of caution, some studies have found little impact upon species diversity (Schlinder 2018), although this may be due to the harsher Mediterranean climate the study roof was in.

Most studies show that additional cost of green roof to a PV system has a rough payback period of between 10-20 years depending on the climate and type of installation. More research is still needed to fully quantify pay back periods in different regions, in order to help prove the case for developers and building owners. In addition, more research is needed to understand the optimum design of biosolar roofs with key areas including vegetation composition and height of PV panel above roof.

There is still no hard and fast rule for designing biosolar roofs, but some general design pointers are listed below:

• May need additional walkways and access routes around PV panels

• Green roof substrate can be used as ballast for the panel arrays. Panels can also be attached directly to drainage layers to prevent piercing the waterproof layer of the roof.

• Vegetation maintenance is as important as ever, as uncontrolled growth can result in shading of panels.

• Species selection during design stage is critical to ensure that correct types are selected.

• Vegetation design can be much more ambitious, as PV panels provide multiple habitats across the roof in terms of shade, wind and water flow.

• Correct height of PV panel above the roof is key to ensure cooling benefits are realised.

GRO has recognised the increased need for guidance in this area, and has included biosolar general design points in the latest GRO Code. These will be built upon in further editions and as knowledge in this area increases.

Alcazar S, Bass B. Energy performance of green roofs in a multi storey residential building in Madrid. In: The proceedings of greening rooftops for sustainable communities. Washington, DC; 4–6 May, 2005.

“Now is the perfect time to talk to...

“The main issue affecting the supply chain is...

“Interest in green roofs has never been stronger”

Myth: ‘The initial cost of a green roof... 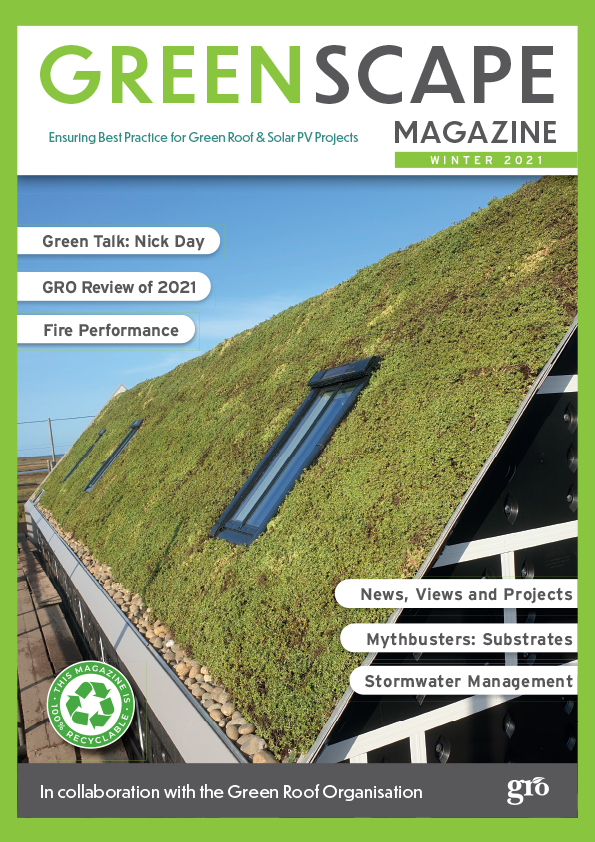